Headline: The Humber is a strategically important region that is vulnerable to tidal flooding. This project will work with the Environment Agency to build the first high resolution 3D numerical hydro-morphodynamic model of the Humber estuary and use it to assess water and sediment management options.

This project will be based at the University of Hull, with placements at the Environment Agency in Leeds.

The Humber estuary and the surrounding low-lying areas are home to 500,000 people, 120,000 ha of agricultural land, and industries worth over £17.5bn GVA. These include the second largest chemical cluster in the UK, two of the country’s six oil refineries, and five power stations. More than 25% of the UK’s primary energy supply flows through the region, and its ports handle 14% of UK trade. As such, the Humber is of national strategic importance.

The wide, shallow, estuary provides extensive wildlife habitat in its large intertidal zones, including multiple designated conservation areas, but due to this same geography the region is at severe risk from tidal flooding during storm surges. Following the catastrophic storm surge of 1953, a tidal barrier was built to protect the city of Hull against a 1 in 200 year event, but the high water level of the most recent severe storm surge, in 2013, was within 0.3 m of overtopping the barrier.  Expected sea level rise in the next hundred years is 0.3 – 1.2 m.

In 2008 the Environment Agency (EA) published its Humber Flood Risk Management Strategy, which aimed to provide adequate protection for 25 years. Following the 2013 storm surge the EA embarked on a review of the strategy, leading to the “Humber 2100+” project to look at longer-term, systems-based solutions for water management. Potential approaches range from local resilience improvements and “living with water” to a large-scale Thames-style barrier. 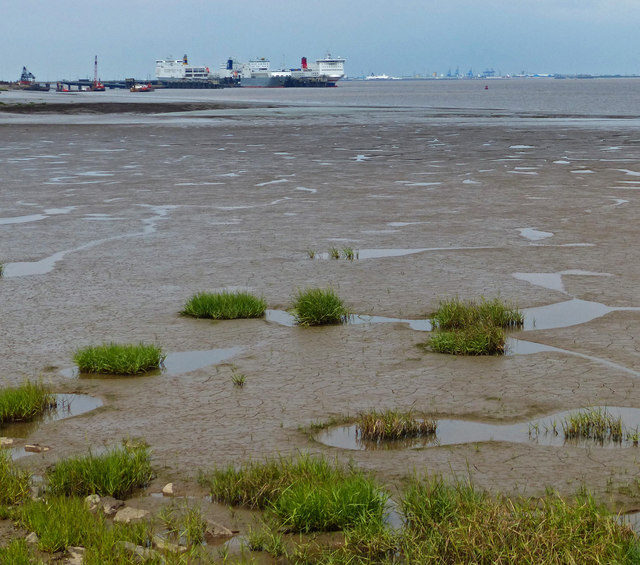 Image: © Copyright Mat Fascione and licensed for reuse under this Creative Commons Licence.

There is historical evidence that the morphodynamics of the Humber do not behave in a textbook fashion in response to long-term changes, such as lunar nodal cycles or sea level rise. This project aims to simulate this atypical behaviour and thus account for it when predicting both (a) future changes to inter-tidal habitats; and (b) the effectiveness and environmental impacts of the water and sediment management scenarios developed by the EA.

A high-resolution, regional scale, 3D numerical model will be built that incorporates the effects of meteorological and tidal boundary forcing and river input variability. Following validation, simulations will be run with scenarios informed by the Humber 2100+ project.

The model will be constructed using an established regional-scale “shallow water” modelling code, e.g. Delft3D, FVCOM, TELEMAC 3D, etc. All of these systems are in continuous development, so the best code to use will be evaluated at project start according on the capabilities of each at that time.

The model will be run on Viper, the University of Hull’s high performance computing cluster. Sources of the necessary data for model construction, tuning, and validation have been identified.

The Environment Agency (EA) are supporting this application as a CASE partner. The student will spend periods of time during the project hosted by the EA to build professional relationships, learn about the context and need for the project, understand the EA’s priorities, and – towards the end of the project – disseminate results and return new knowledge to them.

Jacobs Engineering Group are technical consultants to the EA on the Humber 2100+ project. The relevant team at Jacobs have indicated support for the project, and we are exploring the possibility of them co-hosting the student.

Planned benefits from the project are:

In addition to the training provided by the DTP scheme the appointed student will benefit from extensive learning in the fields of numerical modelling, coastal and estuarine processes, high performance computing, and flood management. Through conference attendance they will gain contacts in the academic community and through placements with the EA and Jacobs they will make connections in the public and commercial sectors.

The student will be fully funded for 3.5 years including coverage of tuition fees and a stipend at the standard UKRI rate (currently £15,285/year, tax-free), plus a training grant.

The successful applicant must satisfy the university’s requirements on English language ability.

If you have queries or would like to arrange an informal chat, please contact Dr. Simon Waldman on s.m.waldman@hull.ac.uk.